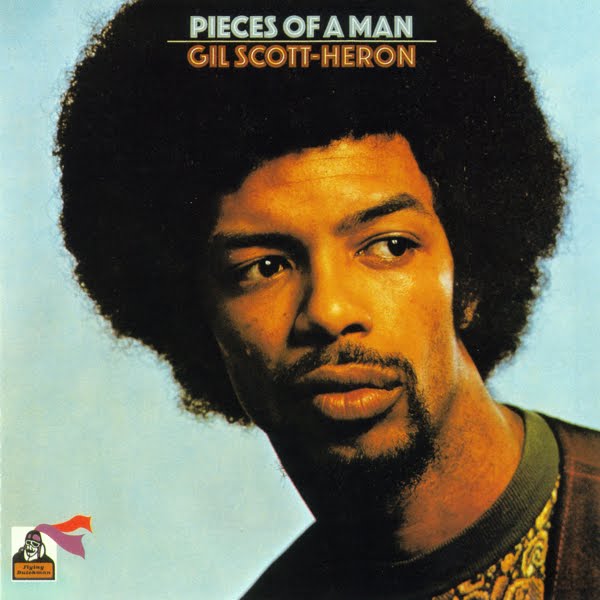 I will not attempt to eulogize Gil Scott-Heron. The only journalist to date that has done an exceptional job of doing so is The Village Voice’s Greg Tate (whose article I HIGHLY suggest you read). Other publications, ranging from the New York Times to CNN simply slapped the tagline of “godfather of hip-hop” prior to a few filler sentences that introduce “The Revolution Will Not Be Televised”. Instead, I will participate in the collective memory of Gil Scott-Heron by celebrating the impact of his artistry on my life, and my own development as a poet and activist.

I had an early introduction to Gil Scott-Heron’s poetry and music. My father has a pretty decent sized record collection, and when I was a child, it was massive. By the time I was 4 or 5, I knew how to operate the record player and some of the basic functions on the EQ. While tapes were the rave of the 80s, I knew how to play records. My house would be filled with music on most days, my parents playing soul records at volumes that made the walls breathe. To this day, music is what makes home feel like home to me. Before I ever knew what rap or hip-hop was, my dad would play his Last Poets records. My early childhood memories are fuzzy, so I can’t say when I first heard their work or Gil Scott-Heron’s. What I can say is that like Michael Jackson, Stevie Wonder, Aretha Franklin, and Diana Ross, I don’t remember a time when I didn’t know who Gil Scott-Heron was.

His mangum opus, “The Revolution Will Not Be Televised” captured the essence of the “Eyes on the Prize” and Black Power specials I’d watch in my childhood on PBS with my parents. A master poet, Gil Scott-Heron was the voice of a generation, and of a deteriorating movement. His life, like Jimi Hendrix, Huey Newton, and many other artists, forward thinkers, and revolutionaries of any time was punctuated by drug abuse. Scott-Heron chronicled his battle with addiction on songs like “The Bottle” and “Home is Where The Hatred Is”. As a child, I wasn’t an avid listener of his addiction songs, and if I did hear them, I didn’t internalize them until much later. When I revisited his work as an adult, I remember walking home from the train station at night or from work with his greatest hits blasting, struck by how he effortlessly married poetry with soul and funk. The brother sang with an authentically bluesy voice that poets attempt to mimic in any medium. In a world where spoken word poetry albums are a dime a dozen (and in many cases, costsers), Scott-Heron was more than simply “ahead of his time”.

On Tuesday, I sat in my father’s living room after he returned from a trip. I could tell by his body language that he didn’t know yet. When I broke the news to him, the room fell silent with shock, disbelief, and sadness. Both of us were a little shaken that he was gone at age 62. Dad is more than a fan of Gil Scott-Heron. I remember my father speaking about Gil Scott-Heron and the Last Poets, and the aura of pride that would surround him during each conversation. He lived through the times Scott-Heron wrote about, and was shaped culturally by his work, as many of us have been by hip-hop. I shudder to think how I would react to my son telling me in 30 years that one of my favorite emcees or poets passed. My father grew up before black history was interjected into most classrooms, and when the the concept of black being beautiful was emerging. At the height and downward spiral of the Black Power movement, Gil Scott-Heron provided more than a soundtrack, and proved that words and music were as effective as educating and organizing.

How do we remember him?

Often at the passing of an influential, brilliant human being, the terms “genius”, “legend”, and “icon” are used, and slowly the persona and myth built around them begins to eclipse the individual who has departed. Building the myth of a man or a woman isn’t the same as remembering them. One thing that I admire about Gil Scott-Heron as an artist and as a man is how he punctuated his body of work with transparency. He lived out his addiction on record as much as he spoke out on politics and poverty. Looking back on such work, we should converse about how many phenomenal musicians and leaders died as addicts or from the health complications that later arose from drug and alcohol abuse. Often, as adults we sit by and watch those we revere and love, be they family or famous, deteriorate and destroy themselves, even despite some of our efforts to help them. What was his relationship with his family, friends, those he mentored? Was he a kind man? How do you remember those that you never met as more than two dimensional projections of their artistry?

As a poet, he spoke with a wit and criticism that painted vivid pictures of men and women in the community. Real issues were made tangible, essential stories and views expressed with room for discussion. The man whose best known work thrust the word “revolution” into the clichéd language of millions of black poets throughout the United States panned groupthink. This is something I would learn by revisiting his work in my early 20s. With a relatively new iTunes account, I purchased the remastered version of the 1974 album, The Revolution Will Not Be Televised. One of my favorite poems from that album, “Brother”, opens with “we deal in too many externals brother, always afros, handhakes, and dhashikis…”, and critiques the reliance of many would-be-revolutionaries on Socialism. This concept of dealing in too many externals reminds me of Mos Def’s line from “Thieves in the Night”: “there never no in-betweens/we either niggas or kings/we either bitches or queens”. Heron explored this dichotomy in “Brother”, and does more than most would in song by simply mentioning it exists: he offers a solution. In 2011, often we discuss the problems, and offer few solutions. Throughout his political work, there is an underlying theme that I continue to notice. Whether it is the political system, mass media, or pseudo-revolutionary dogma, no freedom comes from “tuning in” to a prescribed frequency that dictates how you should think or who you should talk to. In his mind, no revolution would come from buying into any establishment that discouraged critical thinking. This man, whose pain kept him gripping a bottle or a pipe for much of his life, spoke with great wisdom and foresight.

Gil Scott-Heron inspired millions through his words and voice. As a poet, I know several people who shared a stage with him. I pray they share their memories so that we might as a community display our gratitude for his life and contributions through remembering his humanity, his best attributes and his worst. Those who knew him personally can do that more easily, while the rest of us search for pieces of him in songs and poems that continue to stand the test of time.

We deal in too many externals, brother.
Always afros, handshakes, and dashikis.

Never can a man build a working structure for black capitalism.
Always does the man read Mao or Fanon.

I think I know you would-be black revolutionaries too well.
Standing on a box on a corner, talking about blowing the white boy away.
That’s not where it’s at, yet, brother.

Calling this man an Uncle Tom,
And telling this woman to get an afro,
But you won’t speak to her if she looks like hell, will you, brother?

Some of us been checking you act out kinda closely.
And by now it’s looking kinda shaky,
the way you been rushing people with your super-black bag.
Jumping down on some black men with both feet
because they are after their B.A.
But you’re never around when your B.A. is in danger.
I mean your black ASS.

I think it was a little too easy for you to forget
that you were a negro before Malcolm.
You drove your white girl through the village every Friday night,
While the grass roots stared in envy and drank wine.
Do you remember?

You need get your memory banks organized, brother.
Show that man you call an Uncle Tom just where he is wrong.
Show that woman that you are a sincere black man.

All we need to do is see you SHUT UP AND BE BLACK.
Help that woman.
Help that man.
That’s what brothers are for, brother.

About the Author: Prolific